Islands in the Stream

Vintage book and pencil: Minneapolis Dept. of Health & Family Support--another bar of text on the--um, what's the name of each... facet? on a pencil shaft? [lol, "sides"-- discussion in comments]--another bar of type reads Child Care Team and a phone number. 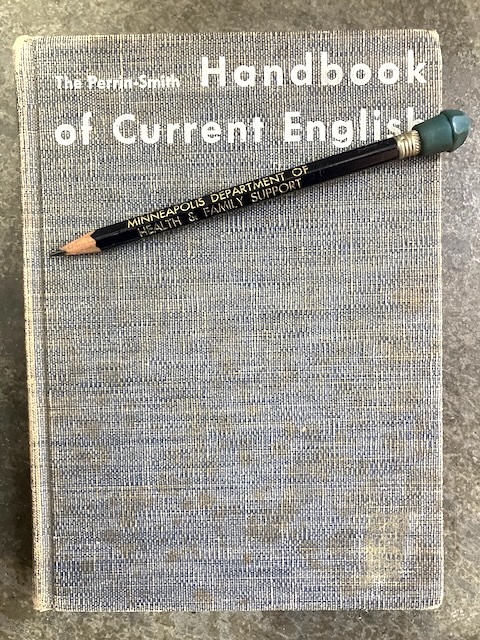 I live in a city and state that supports reproductive rights. Sister is going to call Planned Parenthood on Monday to see how she can help--as states around us outlaw abortion, we will be an important provider.

From Politico, yesterday, "Abortion laws by state: Where abortions are illegal after Roe v. Wade overturned": 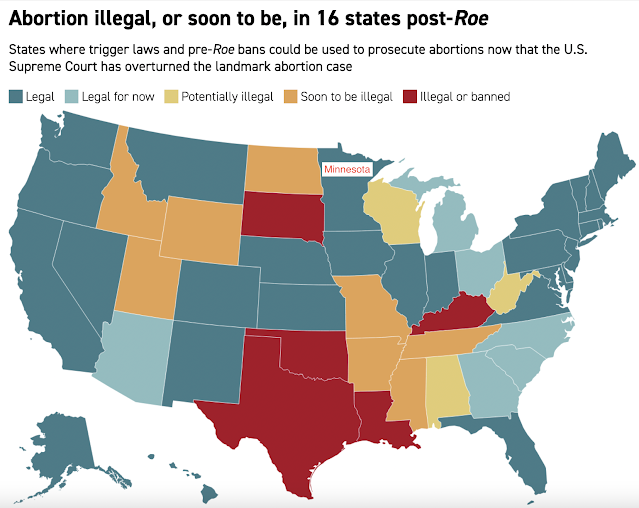 My state also voted for marriage equality in 2012--bink's "DVD to Art" project was part of that push--almost three years before the US Supreme Court ruled on it in 2015. Even if the Court were to overturn marriage ruling, the State still supports it.

"Come and Get Your Love"*

Aaaaand.... funny timing:
a couple weeks ago, bink & Maura decided to get married! 💗
They met in 1999, so it's not the first blush of love. In fact it has a lot to do with getting older together and the legal benefits that marriage automatically grants, like health care powers.

Still, it's a wedding, and that's happy news!
I'm tickled pink...
EVEN THOUGH THE GIRLETTES ARE NOT INVITED!
Maura is not into bears and dolls and wind-up robots or any of that stuff.
bink likes her anyway.
And so do I.

It's going to be a very small wedding in early fall, just a few people--I'll be Best Witness for the bink. You know how it goes--it's either that or you start inviting people and wind up inviting the mail carrier.
They did consider that, but decided to go very small.

Weird blip: an old friend of bink's who is a conservative Catholic said he wouldn't attend if invited (he wasn't) because it would be hypocritical since he believes marriage is a sacrament between a woman and a man.
(This isn't a religious wedding.)

bink wasn't surprised--she'd made her peace with this guy a long time ago. As for me, this man has joined my (short but choice) list of people who make me feel Very Sicilian.

More important: a fun little present for the couple has already come into the thrift store--I take it as a sign of ongoing good things to come.
Fingers crossed!
__________________

* Did you see the excellent TV show Reservation Dogs, about Native kids (teens) on a rez in Oklahoma?
On the episode "Come and Get Your Love" the local Native cop plays this song all the time from 1974, pointing out it's by a Native band, Redbone. I remember the song from high school but I never knew that.

Preview of that episode:

"DVD to ART" - what a most superb thing to have done!
Girlettes will have their own wedding I am sure- the orphans in this house did and may have another ,just because they like cake.

I really think that I should be over the shock of living in this country but I must say the Court did give me a surprise with that WTF BS, It will not stand. It can not.

LINDA SUE: bink is a bona fide hero: It was an comsic-spinning awesome thing she did, a poke in the eye to the pedo-priest––supporting archbishop.


Oh, that's right, I forgot your orphans had a wedding! Mine are very cake-centered too.
They were agitating for a wedding but I'm thinking costumes for A Midsummer Night's Dream may be up next.

I'm with you, you'd think we'd be used to these shocks to the system "THE DID WUT?!?!" but you never do get used to the horror.

Pleasegod it won't come to that...

I believe that’s the Handbook of Outdated English, the edition with the misprint on the cover.

The sides of a pencil are called, as far as I know, sides. The only fancy pencil word I know is “ferrule,” the metal band around the eraser (if there is an eraser).

All best wishes to bink and Maura!

MICHAEL: I must look inside and see just how outdated it is! The cover design is beautiful though.

Thanks for the best wishes--I shall pass them along!

P.S. Found an article "Why do pencils have six sides", so yeah, "sides" it is. I feel this is a missed opportunity.

A: manufacturers get 9 pencils with 6 sides vs 8 round ones from one slat of wood.

But also: sides make the pencil less likely to roll.