UPDATE: I got it!!! Apartment Possibility

I'm anxious today: I'm waiting to hear if I got an apartment--one that feels perfect.
I shouldn't even mention it, I suppose, until I know, but I won't protect myself from disappointment by not admitting I want this place. So I'll go ahead and I say I do, very, very much.

The only reason the landlord, Tom, might turn me down is that I don't make enough money. However, I showed him my savings account, full of money from my father & Auntie Vi. I told him I have no debt, I live simply (no car), get all my stuff from the thrift store, and would have no problem paying rent.
He seemed satisfied, but you never know.

He's sent my info in for background check & credit score, all of which should be A+.
He'll let me know today, and if everything's okay, we'll meet tomorrow to sign the lease, and I can move in July 1-- this Friday!

It's a little one-bedroom in the coolest old building.
I saw the For Rent sign biking past on Saturday--(on a street I never bike on!)--and thought it looked like was what indeed it is:
a building that was built a long time ago to house a grocery store on the first floor and the owners upstairs. (Like where Margaret Thatcher grew up! Not that she's a personal plus.) 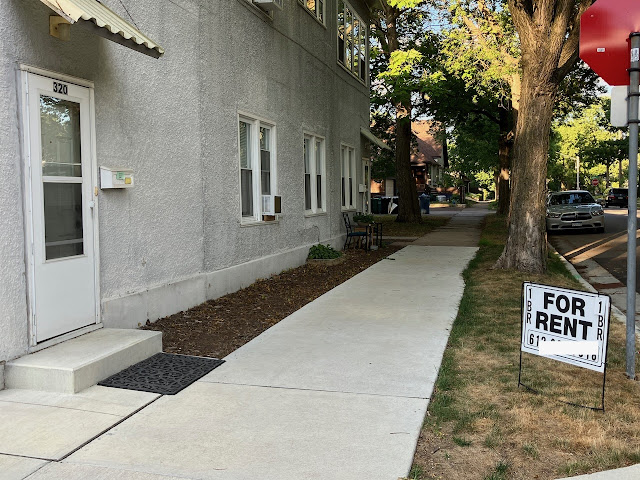 The apartment is on the first floor, so I'd be living in an old grocery, which, the girlettes declare, is just super. A Superette!
Not that it looks like a grocery anymore--it's been apartments for ages, but it does have some historic features.

Tom is a handyman and just redid the apartment, so it's very clean and bright--but you can see the kitchen cabinets are old. I love them! 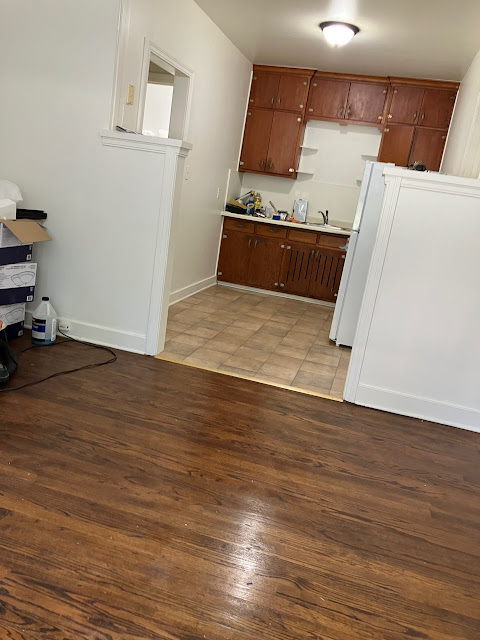 Shelves in a cupboard--and my hand in front of the camera: 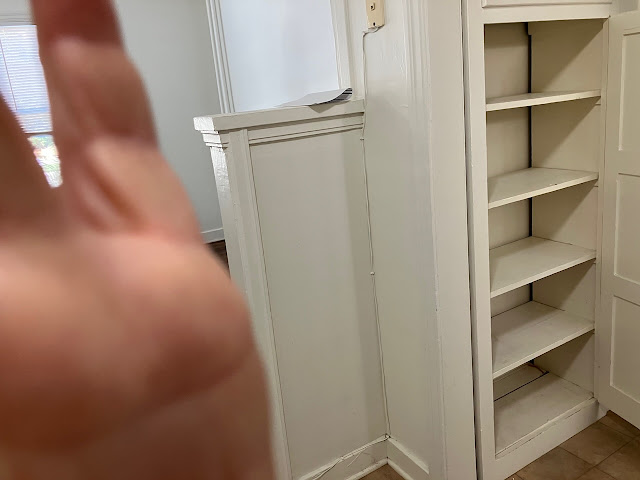 Reason for hope, despite my low income:
Tom goes to a Catholic church that hosts a St. Vincent de Paul group and said that my "faith work" impressed him.
I love that he sees my work that way.
I do too, even if my faith lies more in books.

I liked him a lot, and he actually said, "This may sound odd, but you're the person I was waiting for for this apartment."

When I'd first biked past, I'd also felt the apartment was what I was waiting for. It felt magical, like a little blip in time and space.
And it's between my house and bink's--I was biking home from her place down quiet side streets when I saw it. Perfect, again.

So I will just have to be crushed if this doesn't come off.
And then I will delete this post and move on.

(But it'd also worry me that if an independent landlord wouldn't rent to me, I'd have a fat chance with one of the big rental companies who control so much property here.)

I told HouseMate last night that I might have found a place to move.
She said she'd be sad if I moved, which is nice, but also she had enjoyed living alone again the four months I'd been gone cat sitting.
"I used to think my house was so big," she said, "but sharing with another person, I see it's not."
No, it's not. It's set up for family sharing living space, all together.

Rent really wouldn't be a problem, but I would have to stop going out to eat. Since 2002, twenty years, I've paid Friend Rent, never more than 500 a month. This apartment is double that, and that's still a good deal in this high-rent market.

Besides the perfect vibe and location, this apartment makes me realize how much I want a place of my own again. A place where I can have a few people over for Christmas Eve dinner, like I did for years.
(HM's grown children come over here on Xmas Eve. Fair enough.)

Well, if it doesn't come to pass, so be it.
I'm okay where I am. But I really hope it does.

GAHHHHH fingers crossed, it is adorable!

I love it and am hoping it's yours!

Ugh -- rent has gone up everywhere. I was thinking of moving again to a colder area and found the rents have doubled in the last few years. Where I would have paid $1000 before it's closer to $2000 now! Yikes!!

ps I have some stuff to mail but I'll wait.

I heard an NPR story about people submitting bids to rent apartments — you name what you’ll pay, above the listed rent. What a world.

Oops — I read right past the update. Yay!

Fantastic news! You are going to love living there with all of the old stuff vibes. I've seen a few small grocery stores converted into living places which is great.

Michael -- a friend of mine is running into that in VA. She keeps getting outbid on apartments by persons doing exactly that.

Susan here, very exciting, hope you get it.

Success! That looks a lovely home..wooden floors too!!
Things do just happen.❤️

Linda Sue, Kirsten, Michael, Susan, Tororo, GZ:
THANK YOU all for the good wishes!
I wish we could have a blog party at my new place---I'll be 7 blocks away from a good bakery, Patisserie 46.
Croissants and coffee for all!