Me at the Duluth Folk School last week, with a beeswax food-wrap I just made: 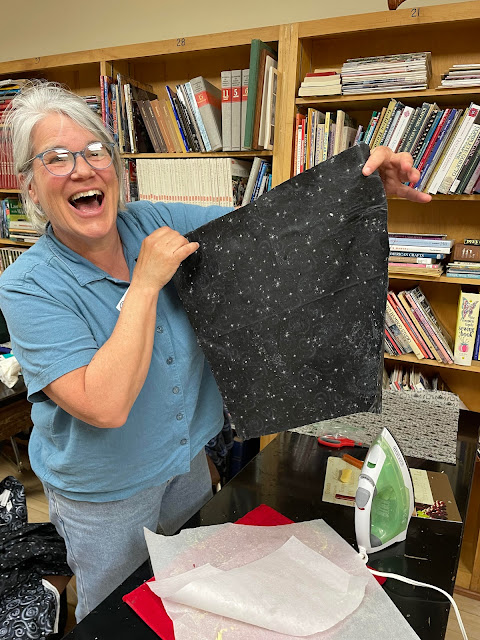 It's super easy:
1. Shave or slice bits of beeswax onto cotton cloth.
2. Place the cloth between parchment baking-paper,
3. and iron (medium-high heat) on top.
The heat melts the wax, which soaks into the cloth. And that's it!

To make the wraps more bendable and stick-to-themselvesable, so you can easily fold them around a sandwich, say, the instructor had melted the beeswax in a double-boiler and added a little jojoba oil (for suppleness) and pine resin (for stickiness).
She brought blocks of this blend to class for us to use.

It's nice, but I know from my crafty friend Julia that you can use the beeswax as-is. Easier to make, and it doesn't hurt anything if the waxy cloth cracks.

Whenever the weather changes, I miss my Auntie Vi.
After months of chilly gray weather, all of a sudden colors are popping out all over.
I want to email her this morning and give her a springtime update: I'd tell her that I'm sitting on the front porch with the cats, and the crab apple trees across the street are puffy pink and the new tree leaves are my favorite tender bright green.

I'd give her a tech update too:
the laptop battery I'd thought was dead magically recharged––(Marz discovered when she turned the laptop on)––so I turned it off again and gingerly carried it outside, here to the porch:
DO NOT LET IT UNPLUG WHILE IT'S ON, or it goes back to zero.
Tricky, because ever since I dropped it on its USB port corner, the power connector doesn't insert securely...
To hold it steady, I've clipped the cord to the computer with a chip-bag clip, like a big purple plastic clothespin.

Boring details! but the sort of thing that makes up a daily day.
Also clever-monkey funny though, too--like when someone has duct-taped their car's bumper to hold it on--these cheap fixes to expensive problems.

Anyway, the recharged battery means I can sit here on the house-sitting front porch surrounded by frothy spring colors and chat on my computer again.

III. Life at the Speed of Life

I miss BJ too.
Here's her photo from the thrift store's Instagram, where I announced her death (she was such a regular regular, other regulars knew her):
BJ, top left, holding Auntie Vi's stuffed Woodstock.
(In that funny way random posts line up, she's above an antique child holding a stuffed horse.) 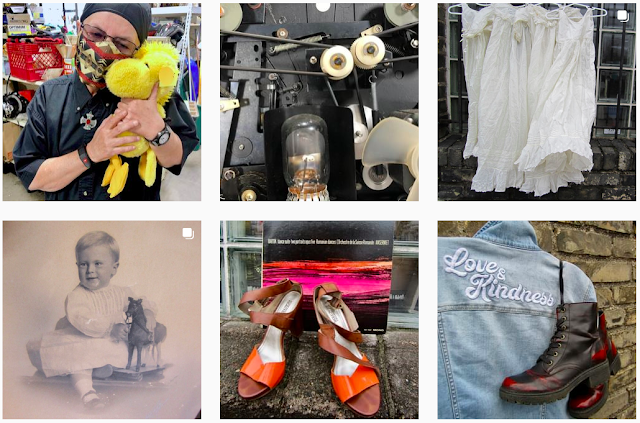 That's the last time I posted for work, though I intend to post there more again, now I inherited a smartphone camera from BJ.
But I deleted my personal IG account after BJ died. (I'd already deleted Facebook.) Social media feels like constant low-level agitation--unwelcome to me now.

bink thwacked her head on a wood beam a few weeks ago and has suffered with a concussion ever since--light and motion make her sick. A concussion doc told her not to look at digital devices because their screens constantly refresh--too fast for us to notice, but it affects our brains.

Like so many things in the world, eh? flashing at us so rapidly and constantly we don't notice, but we're taking it all in.

Not having a reliable computer in the past couple months was frustrating, but it also meant I wasn't bombarded with nanoseconds.
I was taking in the world at the speed of blossoms blooming.
Or a friend dying.

Hanging out with BJ in her last months was ... Important in Slow Motion.
Body Time.
Even to write about it is too fast, too condensed, you know?
It happened at the speed of going-over-every-week-and-mopping-the-floor.

If I wrote about it, it would be what you already know--a list of platitudes.
Be present.
Do the little things that come to you to do.
Love one another.

A friend once surprised me by saying the Beatitudes are boring: "They're just a laundry list. Blessed are the X, Y, Z."

Yeah -- you figured out the computer issue. You might try a computer repair place to see if they can offer any advice. It may just need a new battery.

Speaking of deleting social media: https://verdict.justia.com/2022/05/16/social-media-and-social-forgiveness
I'm down to LinkedIn and am seriously thinking I'm closing the account as it doesn't do much for me.

ps Now I want to make some food wraps. I figured they were hard to make but I can do the whole parchment paper way.

I used the second recipe to make reusable cloths but used cloth that was too porky, I still have a bag of pine resin, jojoba and bees wax so may give it another go. Anyway they are very handy for travel!I have X-ed out all social media except for blog world. I rarely use my phone for anything other than photos. So much better in the mental/ emotional health dept.
Death of BJ- talking about it in condensed manner somehow does it all an injustice but mopping the floor every day puts it right there in relatable sorrow. Sorry , too, about the head bonk- that can be way more serious than anyone realizes!
GLAD, very glad, that you have a working, clipped together machine to take out to the porch, Much better!

KIRSTEN: Good idea about a replacement battery--I just looked it up and they are only around $50--I thought they'd be very expensive.

Thanks for the link to the article--I feel this way too:
"For me, quitting social media was more like clearing clutter than lopping off a gangrenous limb."

LINDA SUE: That's the thing: I didn't want to invest in pine resin & jojoba when you only need a couple tablespoons, but if you already have it, that's ideal!
I would like to make sandwich bags, stitched up on the sides, since the wraps do tend to unroll.

Hi, GZ! Thanks for commenting!