What's next? Frogs from the sky?

We've got a couple Horsemen of the Apocalypse and a smattering of your Plagues of Egypt going on here.
Not the complete contingent for a full-on Apocalypse, but pretty impressive...

"She comes down from Yellow Mountain,
On a dark, flat land she rides
On a pony she named Wildfire..."
--Michael Murphey "Wildfire" (1975)

The air was actually yellow here on Thursday, the first day of "an unprecedented significant air quality event for Minnesota", as the Pollution Control Agency calls it.

Smoke from Canadian wildfires has been "pouring into the state"--(unusually straightforward language there).

The air quality ranges from Unhealthy for Sensitive Groups––such as animals with lungs?––to Very Unhealthy.

The first day of the smoke, I spent some time cleaning up around the mini-plaza next to the thrift store.
The city HAD installed trash cans! At my request! Had I mentioned? 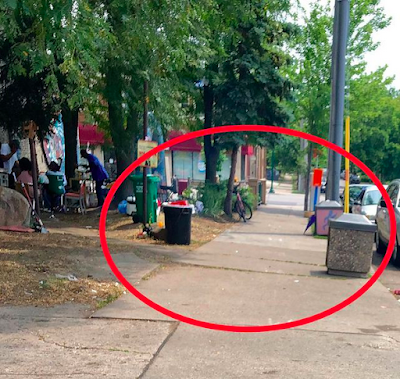 Big Boss was out with a push broom and shovel, and he inspired me to do something I'd considered but dreaded:
I put a big plastic bag on as an apron, wore plastic gloves, and splashed my shoes with sanitizer... and I cleaned out the improvised toilet in a corner of the alley.

I sent photos to the City Council, saying,

I will spare you the Before photo.
Here is the After--I set up a bucket, hand wipes, and a trash bag in a box. That'll work for about 15 minutes. 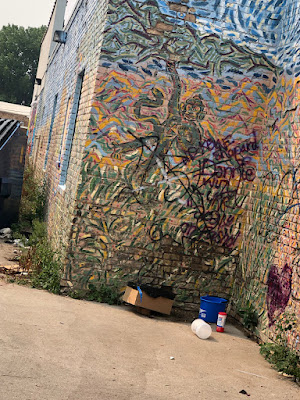 Our famously inept city councilor wrote back that she and the City were "preparing for an immediate response".
LOL. How's that for double-speak?

I appreciated the director of a City agency replying to her and me:
"We are weeks away from a plan."

Weeks away from a plan for a situation (the homelessness crisis, with its companions mental illness and addiction) that has only been growing since 1980.

Is this the best civilization can do???

And Yet, Civilization Clings On

I felt the need for something kind and beautiful and civilized.
After work I stopped at the George Floyd Community Library––I will never tire of books––and after that, a cocktail on patio of the nearby Tiny Diner.

I asked the bartender if he could make a vodka martini with fresh ginger.
He could.
With a borage flower from the restaurants organic garden. 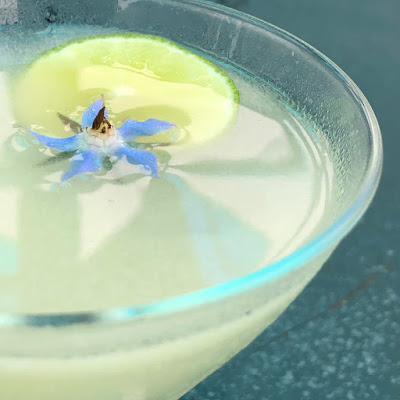 Open Sesame!
I felt restored for the moment.

BELOW: Girlette Low opened and closed the electric doors at the hotel in Duluth over and over.
Martinis we shall always have with us (or alcohol in some form), but things like automatic doors start to look like frivolous but adorable relics of civilization. [Steve points out they are not "frivolous" for those who have physical limitations---quite right!]
"Remember when doors opened for us?" 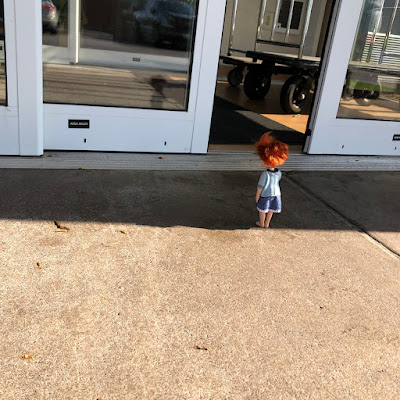 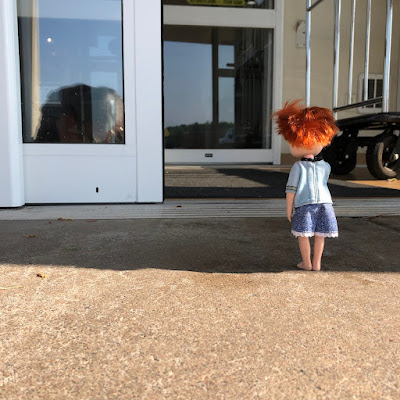 BELOW: Sign at George Floyd Square.
Bob Marley: “The people who were trying to make this world worse are not taking the day off. Why should I?”

I admire you, Bob Marley, but I need a break. 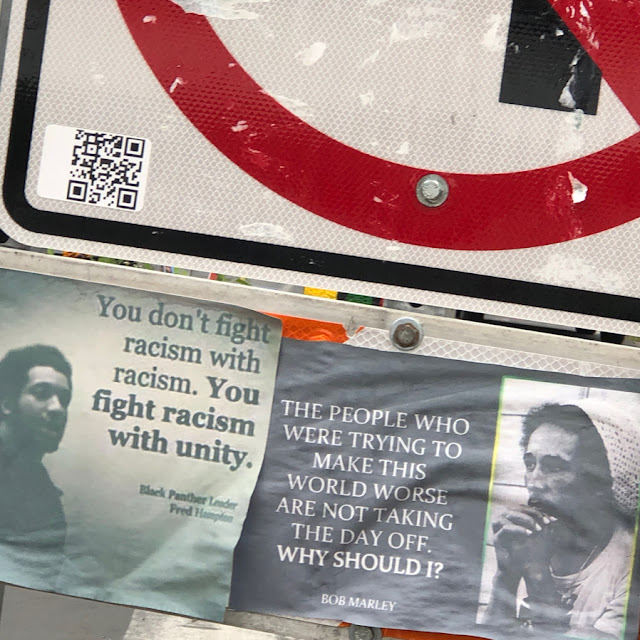 Look on the Sunny Side

Last night I watched the rest of the police procedural Unforgotten.
So good, and so satisfactorily realistic about how fucked up the world is, and how heavy that can be to bear.

I especially loved DI Sunil "Sunny" Khan.
The actor, Sanjeev Bhaskar is British, of Indian descent).  He could almost be a candidate to play Heathcliff: though he's not classically attractive (as Heathcliff should be), he's rather unexpectedly sexy (not clear in photos).

Sunny is the sidekick to DCI Cassie Stuart (Nicola Walker).
She finds the horror piling up getting too much. He is less emotionally permeable than she is and able to leave the horror at work.
Perhaps he is shielded by his wonderfully garish ties... 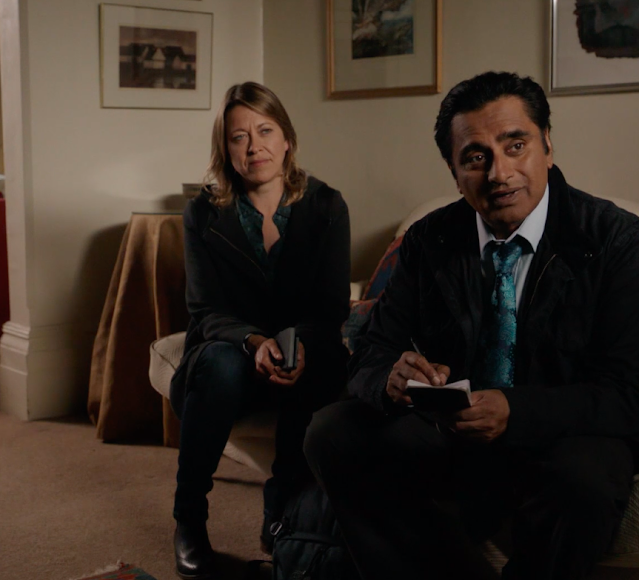 "How shall we unfuck the world today?" By Resirkkulate, a mender in Finland--their Instagram 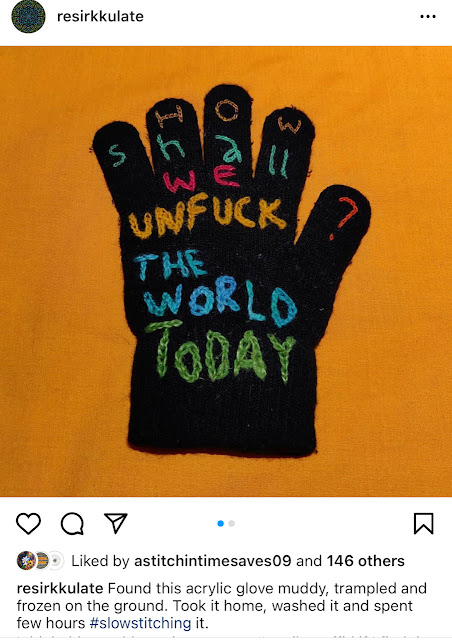 Winds are changeable, and this morning the Air Quality is only in the yellow "moderate" zone.
Which is nice because I'm going to volunteer at the Women's Prison Book Project in a couple hours. The WPBP is only 5 blocks away, so I was going to go even if the air was worse, but it's nice to think I'm not risking my life.
Posted by Fresca at 10:43 AM

We loved "Unforgotten." Nicola Walker is excellent, and yes, Bhaskar is good too.

Bravo for doing something about sanitation problems! Even if the solutions you set up aren't long term, at least they're something. I'm glad the city is working on a plan, but yeah, "preparing for an immediate response" is curious.

I never thought about it before, but automatic doors DO seem kind of ridiculous, don't they? Unless, I suppose, you're disabled or otherwise not easily able to manage a manual door.

ewww and admiration, dear one! I am so sorry you were the chosen one for poo control. but you were the best one for the job because YOU!!
] I so enjoyed Unforgotten. Nicola Walker always surprises , her timing is excellent.

Toilets “encourage people”? To do what? Keep their business off the sidewalk?!

The "for sensitive people" would be for those with asthma, emphysema and other lung conditions that could see them in hospital if they breathed too much of the pollution. for me, that would mean staying inside with doors and windows closed until the air cleared.
The rubbish bins are a good start, but a porta-potty or even two would be batter.

STEVE: Good point--automatic doors are a boon to accessibility!
Hotels and grocery stores for people laden with packages and any limitations on strength or mobility must be a big hassle.

I didn't mean they aren't a good thing--like escalators!
They're one of those lovely optional things we will miss, if/when it all goes down.
But not as much as I'll miss hot running water!

I'm always impressed with how customers with wheelchairs at the thrift store manage our double doors (not automated)---but then, they have two arms.

LINDA: Thanks! I want a hazmat suit if I have to do it again. (It's not THAT bad, but it's disgusting.)

MICHAEL: People are stupid. "Porta-potties will encourage people to stay," a customer told me.
I gave her a withering look (she's a pal).
"You're right," she said. "They're staying anyway."

BECAUSE THEY HAVE NOWHERE ELSE TO GO.

RIVER: Thanks, yes, the Air Quality Control/ Weather people do define "sensitive groups".
I was being sarcastic--- they say if you aren't "sensitive" you can do all your usual outside activities, like going running.
I just really doubt that it's good for anyone to breathe this air deeply:
I mean, we may not have asthma, but we all have lungs.