The Girlettes Who Came in From the Cold . . . and Went to the Creek

I biked with the girlettes to Lock & Dam No. 1 yesterday.
Chain-link fence with barbed wire on top barred the promenade to the 1970s-ish Control buildings.
(Usually you can walk out. Is it closed just for Covid time?)

Facing a wall, the girlettes wanted to reenact the end of The Spy Who Came in From the Cold, (1965)  [last 2 minutes on youtube]

when Richard Burton and Claire Bloom try to escape from East Germany over the Berlin Wall: 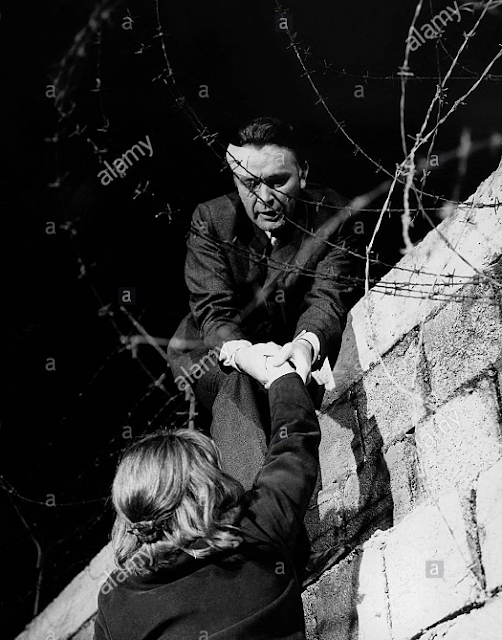 It's a sad ending, so first,  something silly from the Blooper reel.

NO DOLLS WERE HARMED in the making of this tableau.
They kept laughing: 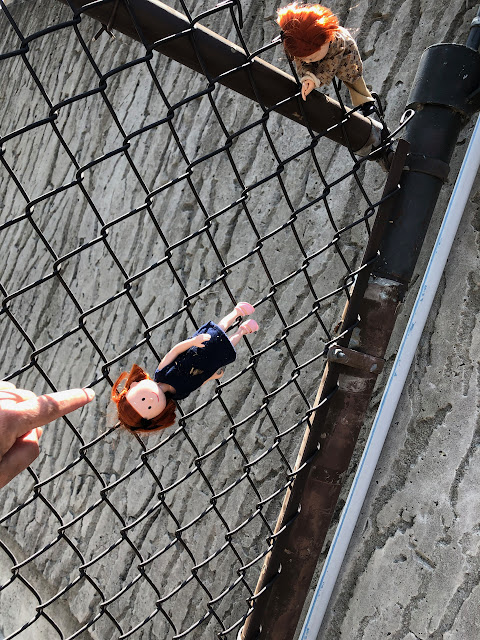 Also, a couple fire fighters came along an access path--to work on some equipment.
They saw the dolls on top of the fence and said,
"Are they stuck? Do you need a ladder?"

Instead I explained what I was doing, but neither young man had heard of the movie... nor, I sensed by their blank reaction, had they heard of the Cold War, or even the Berlin Wall?
Ancient history!


The Girlettes Who Came in From the Cold

First, the spy climbs the wall to get to the other side. 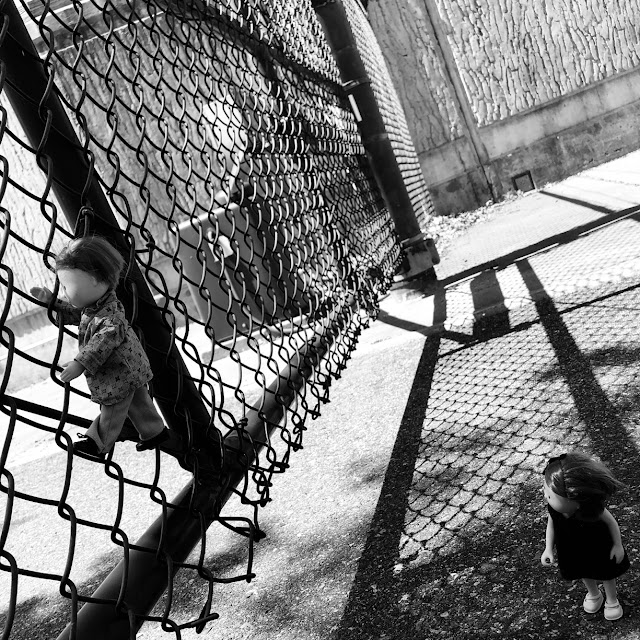 Then the librarian climbs, 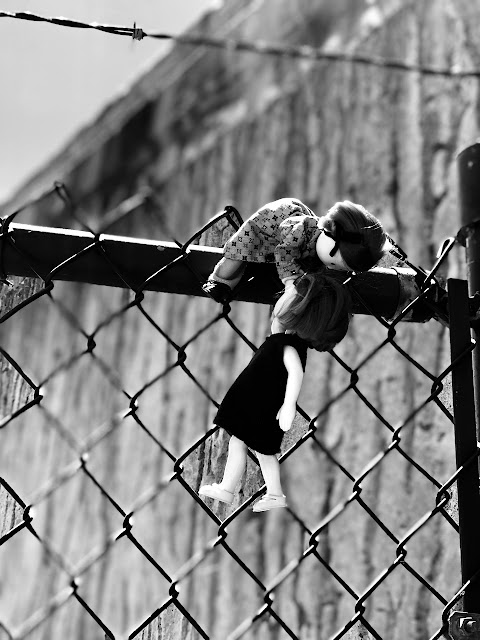 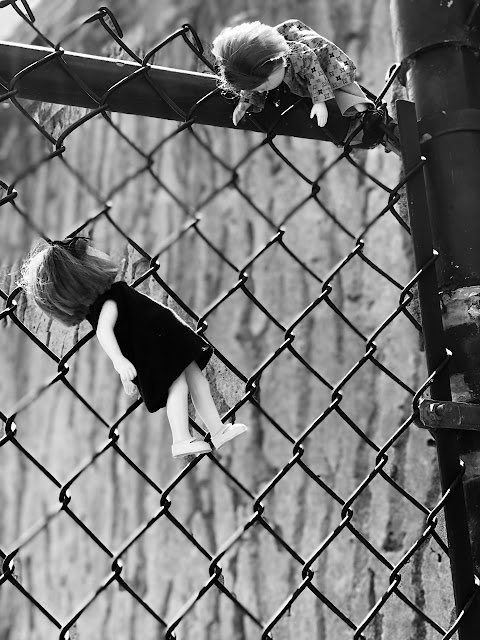 The spy goes back down to the librarian, knowing it means death. 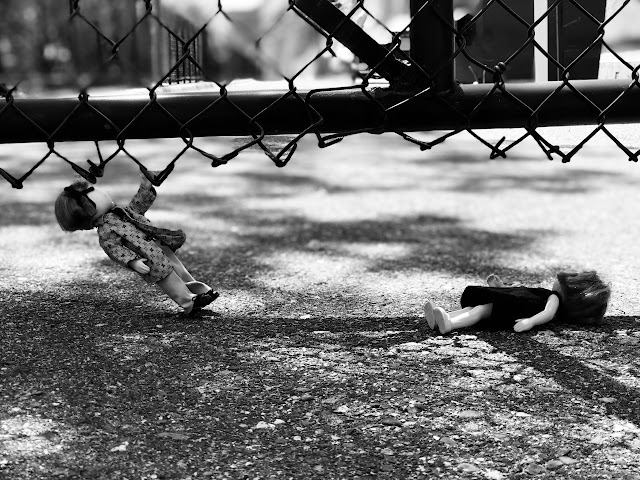 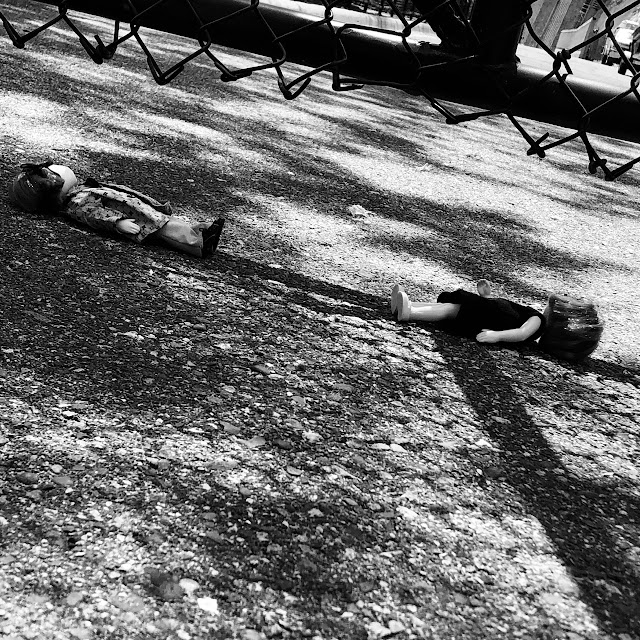 So sad! I was a little disturbed at the end, but they thought it was all a lark.

They got up, and we all went and spent the afternoon at the creek.

Low was worried the water was too deep. She likes dirt. 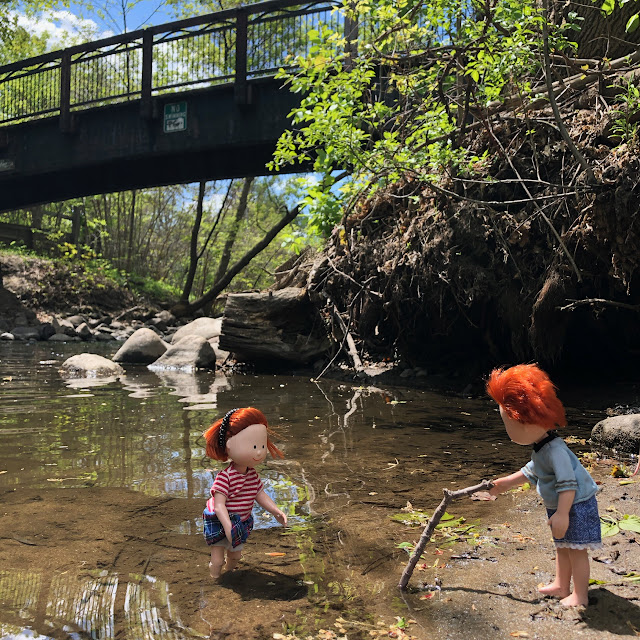 BELOW: They played "Do you like butter?" with a dandelion.
(Did you play this when you were little?)
If there's yellow light under your chin, you like butter.

The thing is, the dandelion casts a yellow light--you can just see here--how does this work? 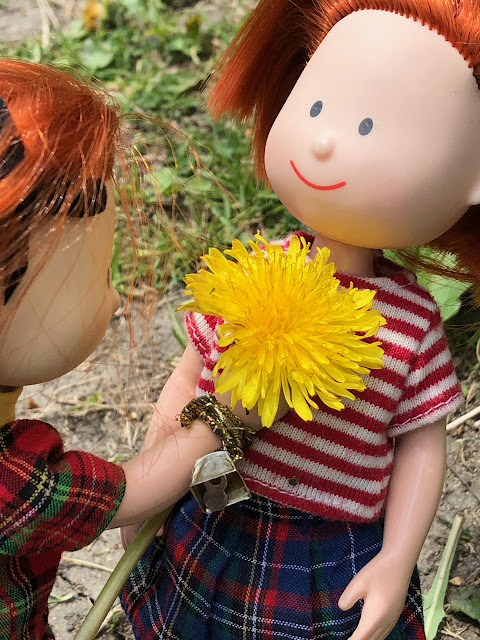 And they read up on the circus (not John Le Carré's spy circus) for Costume Day, coming up! 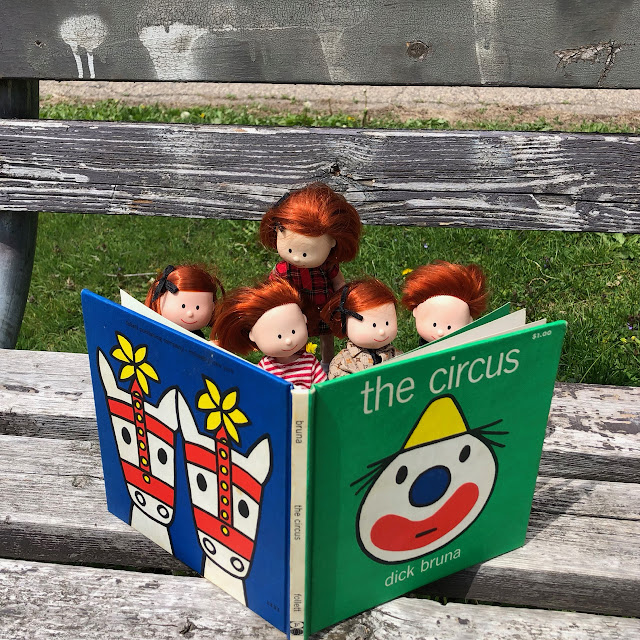 I like the switch from black and white to color. And the realism of that desperate ending. The young people missed out on a good movie. (I used to hear students way they’d never watch a movie in black and white.)

I recall my paternal grandmother pushing that dandelion folklore. I wonder if it works on the bearded?

Elsine remembers the butter trick woth a flower called the buttercup. She says they used to be everywhere.

Elaine! With! My usual phone typo, one letter to the right with my slight crooked index finger. Or fingrr.

Such an ambitious film to play staring the Girlettes , the ending was like edge of the seat screaming "NO, don't go down there, she is dead already!!" But did she listen- as Girlettes often do not??? So sad indeed boo hoo, and then everyone up for a read and i hope a snack! Costume day coming up? Oh goody. The Orphans want to have a runway show of their special designing skills...I am not so sure about it.
I think any yellow flower will do- ours were always buttercups, and the answer was always YES.

AND the creek shot is delightful, I can feel the cool water and sunny bright day and squishy mud. Perfect!

There is (was) an OTR freight carrier with orange trailers. They cast an orange shadow.

I love the re-enactment in black and white! So dramatic. The girlettes are good actors. Playing in the stream and then reading looks like fun too. Can't hardly wait to see the circus costumes.

Okay, I looked it up: Why buttercups reflect yellow--it's to do with attracting pollinators:
"Researchers discovered that the buttercup petal’s unique bright and glossy appearance is the result of the interplay between its different layers.
In particular, the strong yellow reflection responsible for the chin illumination is mainly due to the epidermal layer of the petal that reflects yellow light with an intensity that is comparable to glass.

Scientists have been interested in how the buttercup flower works for over a century.
They have previously shown that the reflected colour is yellow due to the absorption of the colours in the blue-green region of the spectrum by the carotenoid pigment in the petals.

"As the blue-green light is absorbed, the light in the other spectral regions (in this case, primarily yellow) is reflected.
It has also been known for many years that the epidermal layer of the petals is composed of very flat cells, providing strong reflection."

But it does work--just not as strongly--with the non-glassy surface of a dandelion too!

MICHAEL: Yes, a buttercup--I think we used those too--I dimly remember that a little rhyme that went with this game...?
Try with a beard and report back!

I'm glad to hear the girlettes & I caught the desperate ending--it was sort of hard to set that up, at the very end--"Oh, this is too awful!"

I've heard people say they won't watch b&w---it astonishes me.
I imagine one day people will say, "Oh, I'd never watch a 2D movie" or something.

LINDA SUE: It surprised me the girlettes even wanted to take on such a film, but they were all for it!

The dramatic retro setting at the Lock & Dam inspired them--and they are rather emotionally remote from Human Concerns, so they think it's all a game.
The ending is so sad--"She's already dead--don't go down!"--and yet going down his only way forward into being fully human again...
Talk about no-win.

JOANNE: Interesting. I looked it up:
"There is a parameter on most lights called shadow color, which adds color to the shadows cast by that light."

RIVER: They really are good actors, as this dramatic ending is nothing at all like their own lives!
(Though they would sacrifice their lives for one another, I'm sure, if it came to such a weird situation...).
Circus day is tomorrow (Sunday)--photos to follow!

I love all these pictures, the dramatic black-and-white and the bright ones by the river! Grat teamwork, as usual.