These Days: What kind of peace?

Camouflaged trucks, stores on Lake St. (including my thrift store) boarded up preemptively, military and police standing around with machine guns, laughing with one another...
It's rather like being in a  city under martial law (not quite, not yet).
A few blocks from bink's house: 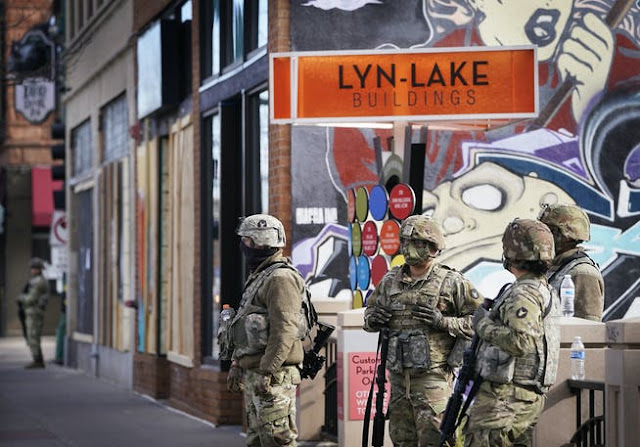 photo via the Strib
At work I met with the new Marketing Director yesterday. (We didn't have one before.) She is the wife of the executive director who has retired from a lifetime as a marketer for places like a certain "global food corporation" in town. She is working for the Society as a volunteer.

I'd dreaded this meeting because, in my experience, marketers always reek of the sulfurs of hell.
And sure enough, she told me anything I posted on the store's FB page should just be about PEACE.
This is what I posted in reply on my FB this morning (not that she'll see it--she told me she doesn't "do Facebook"-- but I needed to say something--and it applies broadly:

We are in unprecedented days––I walked home in tears of shock and rage yesterday as convoys of military troop trucks rolled past me down Bloomington Ave. in Minneapolis.
Here to keep "the peace"? What kind of peace?

I came home and once again I turned to the "Letter from a Birmingham Jail" for insight and guidance.
I tell ya, the image of Martin Luther King Jr is sometimes trotted out by white liberals (yeah, like me) to show what side of history we're on, as if his words were mere tokens.
But I re-read his "Letter from a Birmingham" jail again,
and, again, again, again, his words are not lap dogs--never lap dogs!--they are ON FIRE.
A carefully tended and banked fire, but there's no cool ash there you can pick up safely.
But then, safety is not our ultimate goal.
I was thinking of his "Letter ..." because yesterday a liberal white lady told me (another white lady, ya know) that the response to the Chauvin trial should be "PEACE--that's what everybody wants".

I must memorize MLK's lines below so I can use them next time.
(Because this is not the 1st such exchange I've had, and it doesn't look likely to be the last.)

So, once again, some of the living words of Dr. Rev. Martin Luther King, Jr's "Letter from Birmingham Jail":

"I must make two honest confessions to you, my Christian and Jewish brothers.
First, I must confess that over the past few years I have been gravely disappointed with the white moderate.

"I have almost reached the regrettable conclusion that the Negro's great stumbling block in his stride toward freedom is not the White Citizen's Counciler or the Ku Klux Klanner,
but the white moderate, who is more devoted to "order" than to justice;
who prefers a negative peace which is the absence of tension to a positive peace which is the presence of justice;
who constantly says: "I agree with you in the goal you seek, but I cannot agree with your methods of direct action";
who paternalistically believes he can set the timetable for another man's freedom; who lives by a mythical concept of time and who constantly advises the Negro to wait for a "more convenient season."

"I had hoped that the white moderate would understand that the present tension in the South is a necessary phase of the transition from an obnoxious negative peace, in which the Negro passively accepted his unjust plight, to a substantive and positive peace, in which all men will respect the dignity and worth of human personality. "

There may be little I can do, except show up--I have not joined a non-violent direct action group––and say, THIS is the more convenient season.
Now is the appropriate time.

But I can't say anything much on the store's FB page because it is now monitored--I must submit anything that is not a toaster and the like to Big Boss---who was at the meeting too, supporting everything this woman said (and, I kinda hate to say this, but I thought of him: "You are a lap dog")---and if he is not available, to this Marketing Lady.
Not that I ever posted or would post anything incendiary there.
I just quoted stuff like Pope Paul VI, "If you want peace, work for justice".
Not that she'd know this because... get this--she had NEVER LOOKED at our FB page!
She had to ask me for the URL.
(Of course that ^ might have been a power play on her part--she is in Communications.
She also arrived half an hour late and wore a  face mask with a tongue lolling out of a mouth on it---what does that all communicate?)

So I am resigning from doing the store's social media because I cannot stomach being a lap dog to this sulfurous slime lady.

For the time being, I am happy sorting books and toys. I love toys and books!
I have more power & freedom there than I would negotiating with marketing.
Posted by Fresca at 8:57 AM

AMEN! AMEN! AMEN! Choking back my own tears of frustration.
I have often be thrown into a rage by white people who assume the we share the same opinion because we share a skin color.

Here I was thinking if I could only learn to keep my mouth shut I could keep the peace. Thank you (and MLK) for reminding me that I would have been keeping the wrong kind of peace. A group might be the answer for you but don't underestimate the power of a truthful person who is willing to talk (which you clearly are) walking through the world. Then again groups have never been good for me.

My amended prayer for you from earlier this morning , May an ACTIVE peace find you and wash over you. ❤️❤️❤️
--Tracy

https://readingaustralia.com.au/authors/rebecca-cool/especially on the lap of White Sulphur - clearly she does not understand what is happening here! If you must stay on in that shop then you have chosen well. Toys and books, yes!! Time for a Girlette march!

Hasn’t that lady heard? No justice, no peace.