Marz has undertaken to read more classic books.
What are classics?
I looked up lists of Best Books--found a good List of Reading Lists www.sonic.net/~rteeter/greatbks.html.
It includes lists from Columbia U, The Guardian and Utne Reader (remember them?); lists of Nobel Prize Winners and World Classics in Translation, etc.

I got ideas for myself from nonfiction lists, and I ordered from eBay a couple-few that never come to the store.

Lee : An Abridgement, by Douglas S. Freeman.
I wouldn't usually read an abridgement but I don't care enough about General Robert E. Lee to make it through 4 volumes.

There are replacements--books I gave away and now want to read again:
Writing in Restaurants, David Mamet
Deep Survival: Who Lives, Who Dies, and Why, Laurence Gonzales
The Habit of Being: Letters of Flannery O'Connor

For Marz, I pulled a bunch of classic-y books from the shelves at work--of course limited by what's on hand.

This is the first batch I sent her:
Robert Graves on WWI
Sinclair Lewis on Small Town Minnesota
The Hounds of the Baskervilles---(I had no idea this is so highly regarded)
The Tempest because it's been used in so much modern pop culture, including Star Trek;
I think she's read the Metamorphosis, but this copy had some interesting looking critical essays;
and (should I have read it again before recommending it?) in high school I'd loved "SF Masterwork" Flowers for Algernon: 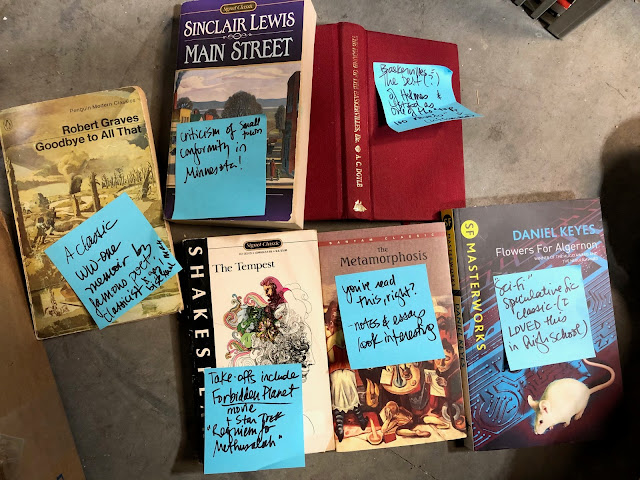 I didn't see Doonesbury on lists, but if I taught history, I'd teach Doonesbury. This vol. covers the Reagan years.
Similarly, Temple Grandin's memoir is a personal choice: she opened my eyes to how differently brains see the world. 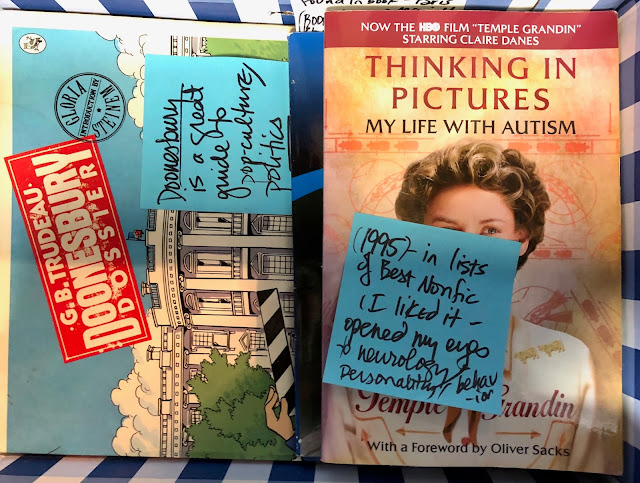 I've never read Emerson's "Self-Reliance", but I think I'd have loved his “nothing has authority over the self" philosophy when I was young. Maybe I still would, but now it reminds me of alt-right figures like Timothy McVeigh and the Senate-storming goons.

I love the story of the House of Atreus--that family! It's just like us!
It's the basis for my short movie Orestes and the Fly (A Tragicomedy with Tap Dancing).
I made it (with bink's help) in 2009 and haven't rewatched it in years--it's on youtube, where I left this comment:

"My father e-mailed this comment: 'The Fly movie seems to be a blend of Dr. Calagari's Cabinet and Singing in the Rain. Maybe a little Marat/Sade thrown in.'" 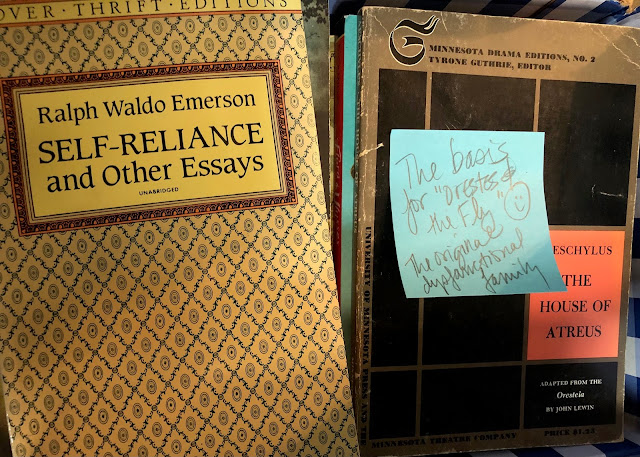 Kate DiCamillo's a local author--I hadn't realized her Flora & Ulysses, about a girl and a squirrel, had won the Newberry.

Has Elie Wiesel's Night been surplanted by any other book on the Holocaust? I don't know. Maybe Art Spiegelman's Maus.
I had to look up The Good Earth --another book I haven't read in 40+ years--to see if it's considered racist. In fact, not. (Though it's written by the daughter of white missionaries to China...) Oprah chose it for her book club in 2004.
There are better books on China, but part of the idea of reading Classics is to dip into the GFK (General Fund of Knowledge) that shaped past generations and still shapes us now. And this is one.
Confession: I have never read a novel by James Baldwin, just bits and pieces and the movie I Am Not Your Negro.
The Stoics, of course.
I'd pair A Separate Peace with Emerson. It's another book I had to look up--is this still valid? Readers say so.
Huh, I guess I should reread a lot of these myself.... 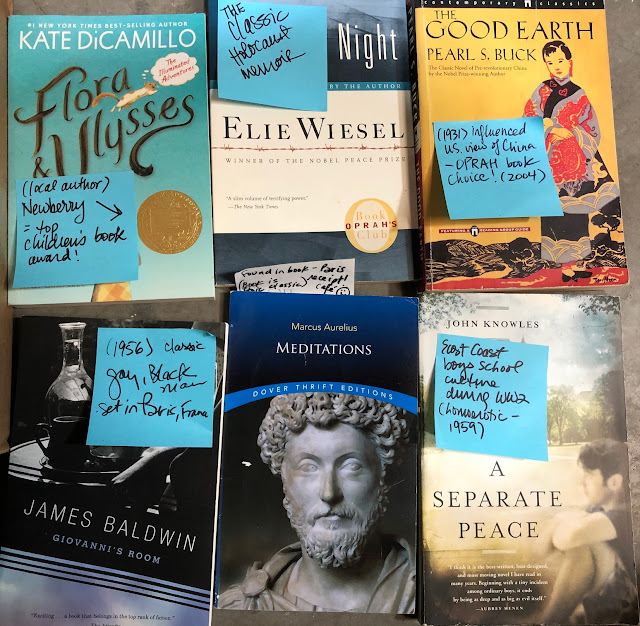 "Black History Is Every Day"

I got lucky this year for Black History Month.
Last year, my display of books by or about Black people got bought up all at once by a regular customer. I like her--an old Black woman who shares books with her grandkids (grown), so I didn't really mind, but there usually are only a few books on Black life on hand, so that was it. The display was for one day only.

This year, however, someone wonderfully donated a box of good books--many current and new, unread, and many by Black authors.
I've been ekeing them out, putting out a few at a time. I also priced the new ones higher because--I hate this--if prices are too low, resellers snatch up everything to sell to Amazon or Thrift Books or whomever. (I think they still snatched up some of the $4 ones, but at least the store gets more than 99 cents for them.) 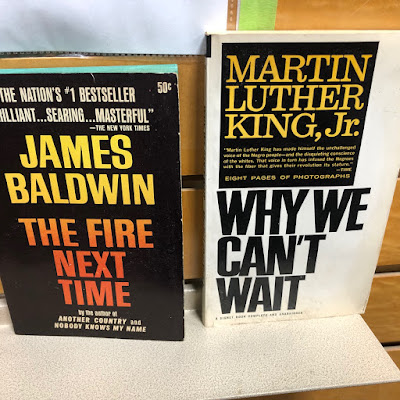 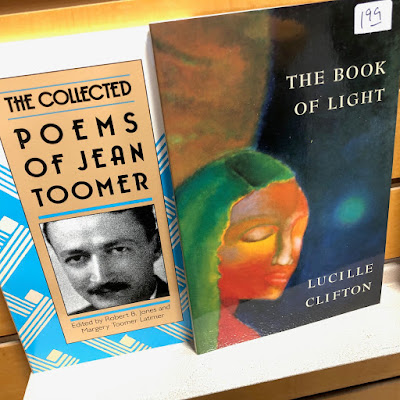 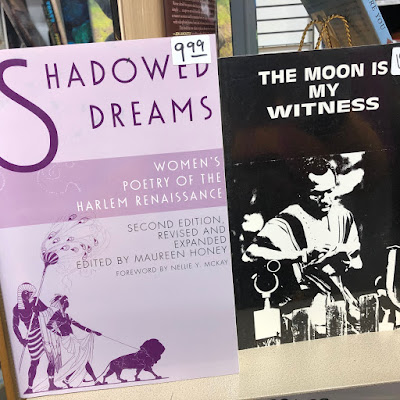 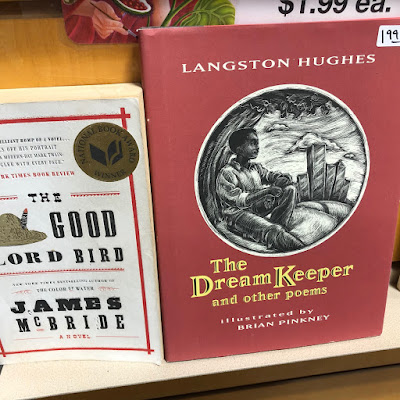 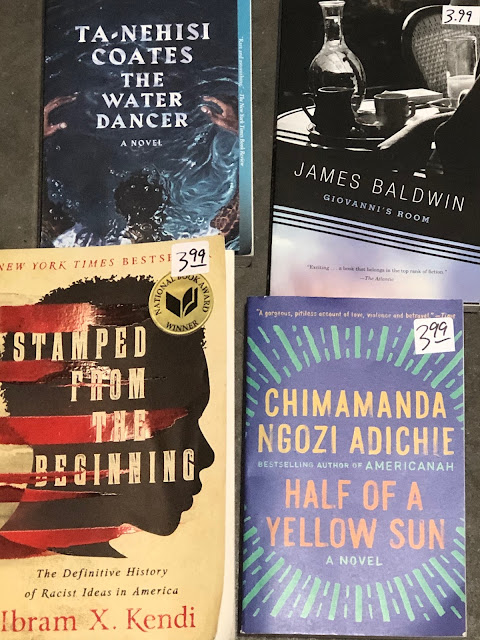 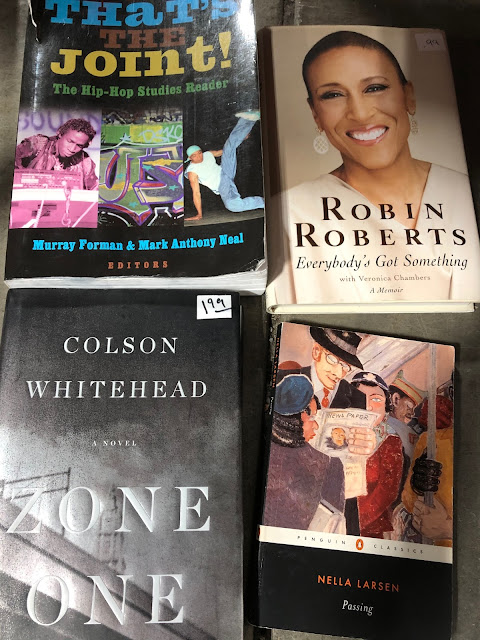 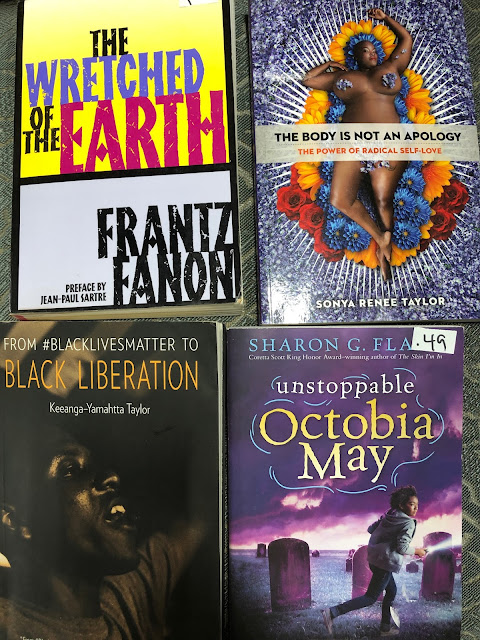 Kareema and I watched the movie version of "Flora and Ulysses" and enjoyed it. Don't know how closely the movie followed the book, though.

Wow. A lot to respond to here!

The best Baldwin, I think, is "Giovanni's Room" -- so that was a good choice. It's better than "Go Tell It on the Mountain," from my perspective.

Emerson makes me tired. I have tried and tried to read him and I always get lost in the weeds.

I enjoyed "The Good Earth" a lot when I read it several years ago, and it didn't set off any alarm bells re. racism. I think "Night" is still the authoritative Holocaust book, for sure. And I can tell you both "Flowers for Algernon" and "A Separate Peace" remain popular reading material for modern teenagers, at least at our school!

I can't read classic such as these, they make my head hurt. I just don't understand them, same as I don't understand the world and most people in it.
I prefer fiction which grabs me on the first page and lets go at the end of the story, but there are plenty of those that finish and leave me wanting more.
I liked the video, loved the blanket bleeding effect, that's genius.