UPDATE: Michael has posted his own pencil pots on his blog too.

I'm relieved to report that my pulled groin muscle is better today--I can start gentle p.t. stretches this afternoon.
Seems I'm lucky and that falling on my bike I only sustained a level-1 pull, which should heal in a week or two...
It's a scary reminder of how your life can change in one moment.

I'm taking the week off work---way too many ways to further traumatize my injured leg there. Sorting & displaying books is all about lifting & twisting, pushing and pulling, and always on my feet, on concrete floors.
Of course I get no sick pay, and I'm sure my coworkers would go to work anyway if they were injured. (I'm sure, because they do.) I saw it in nursing home coworkers too.

I keep noticing how lifetime/generational poverty plays out, compared to the middle-class culture I grew up in.
Attitudes toward physical pain are very different.
What I've seen:
If you've always been poor with no (or insufficient) health insurance, you're more likely to accept pain––temporary or ongoing––as a given.
"Nothing to be done," my coworkers say.

My father & auntie who grew up during the Great Depression, the poor children of Sicilian immigrants, had a similar grin-and-bear-it view of illness & injury.

If you're middle class, you're more likely to view injury and illness an an outrage, a personal insult that should––and that can––be righted. You're likely to go to work anyway, but because of the dominant Protestant work ethic, not because you would sink without the pay. (You probably have sick pay.)

My mother, from a middle-class family, always took her children straight to the doctor, kept us in bed, and coddled us whenever we were sick.

Of course this can all breaks down if you're dealing with major illnesses... I've seen the bottom drop out when a middle-class person faces chronic illness, mental or physical.

Honestly, I see strengths in both attitudes--the Stoic & the Proactive. The real problem is that they are determined not so much by choice but by economic class.
I mean, there's not much point in being Stoic if there is help at hand.

I want a society where we all chip in so help is at hand for everyone.

Orange Crate Art posted a beautiful photo of a realistic pencil pot from a Cuarón movie––the sort of thing a good set designer creates––which inspired me to photograph the two pencil jars on my table. (There are a couple more across the room too.)

The first pot I made about thirty years ago, in my one pottery-making phase. (I was working as a janitor at a place with a pottery studio I could use for free.) I see the jar every day but never notice it... till now, photographing it! It's unlovely, but I love it. 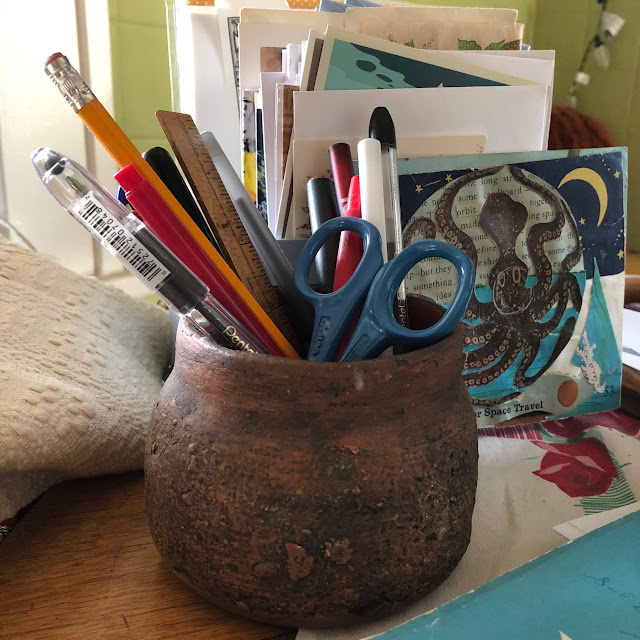 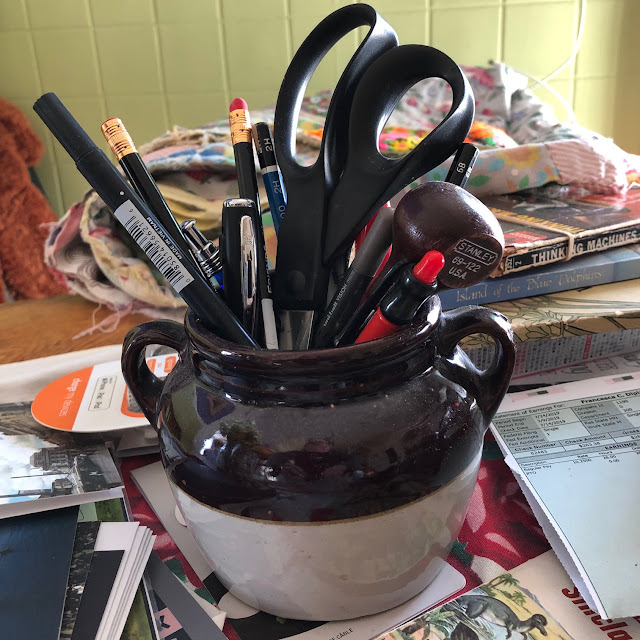 While I'm at it--there's a folded quilt in the second photo--it's another Rescue from Recycle at the thrift store.
I don't much like pastels, but the fabric is beautifully worn. 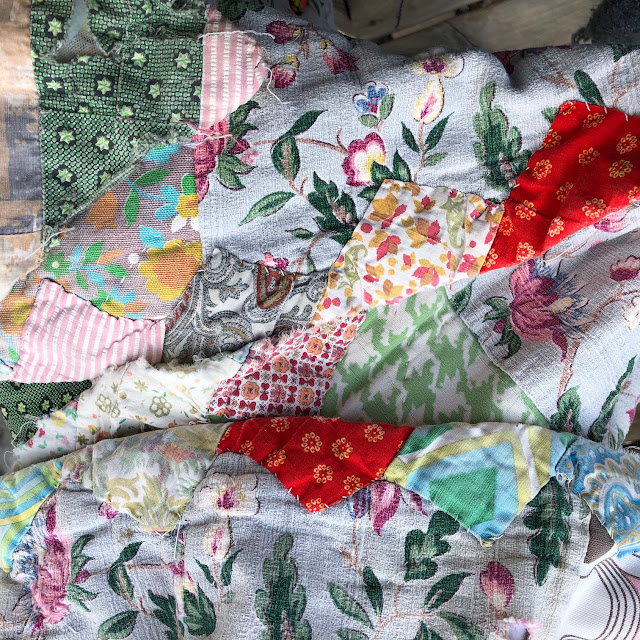 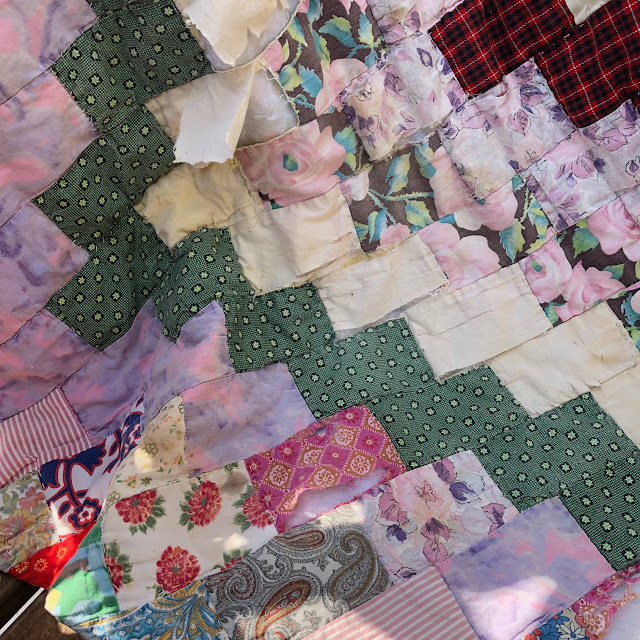 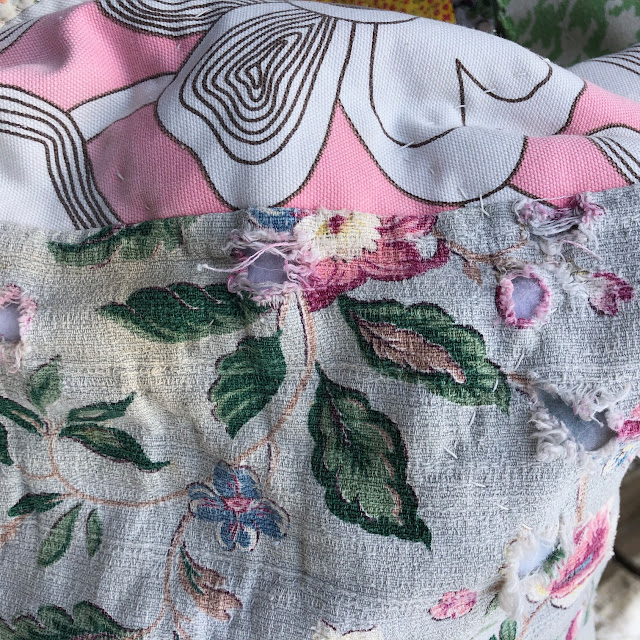 Below is one side of the quilt--I'd washed & dried it in xtra-hot, then aired it in the sunshine.
It's so worn, it's not very usable, and it's an unattractive pattern (I think), but there's a lot of fabric that could be harvested. 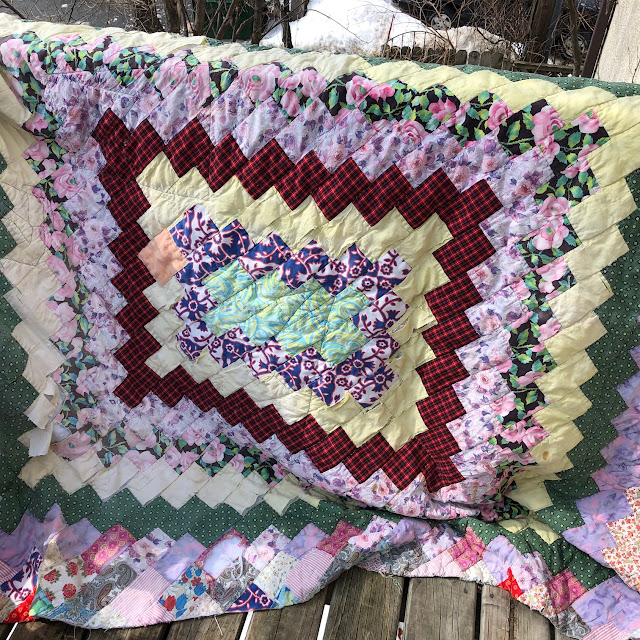 I don't know though--there's that push-pull about cutting up cool old things... Books too. It's great to give them new lives in new forms, but if they still hold together, I hesitate to take them apart.

If nothing else, I'll take this quilt back to the store and put it in my Cool Old Things shelf--I bet someone would be thrilled to find it.
Posted by Fresca at 11:05 AM

Those quilts : the stuff people throw away....

What's the Stanley tool in the second pot? An awl?

With 2H and 6B pencils, it looks like you’re pretty much set for anything.

Micheal: It is mind boggling what people throw away. At least the second quilt they gave to the thrift store . . . who was going to throw it away.
(Or "recycle", which means baling means the end of a quilt as a quilt or art project.)

You have a good eye: the spread of the pencil lead softeness and, yes, that is an awl:
I used to use it in book making but now it mostly punches holes in plastic toys. :)

Your pot has so much character. The quilt is not without interest, it's just that clearly the person who made it put the cool stuff in the center and then trailed off/used what was left toward the edges. So, the central part is beautiful from a distance, but the edges reward close examination. A puzzler.

Glad to hear you are on the road to recovery! The tough part is that since we tend to depend on certain body parts they often take longer to recover. And just when we think they are back to what they were, we take a misstep and ow!

Interesting comment on how injury and illness are viewed. Sometimes I think we view illness and injury as a failing in our society. And often wonder if it is a throw back thought to our Puritan days. I am guessing that illness or injury was not viewed favorably in those days as it was not likely seen as a sign of weakness. Businesses are not kind to those who are ill or injured. Often employees feel they must be at work regardless as they possibly fear of being seen weak and thus let go when needed.

I have worked for places that had sick pay but employees were STRONGLY encouraged NOT to use it as it came out of overhead and thus, the profit. Or the departments wanted to keep costs down. Never mind that the employee with the flu came to work and spread it to everyone.

The quilt - what can I say that I haven't said before! I just don't get people. Obviously someone spent the time and labor to collect the material cut the pieces out, pieced it (not badly) and then sewed it up. I would guess from the materials that they may have been pieces of clothing they owned. Although they may not have known much about fabric as some appear to be more of the polyester type rather than cotton or a thicker material.

Sometimes people get rid of stuff as they don't want the homemade look or it embarrasses them.

Love the pencil pots. I have two -- a Frankoma sugar pot and a mug from an engine company.

I saw an article in the Wall St Journal about how thrift stores don't want some of the stuff from Marie Kondoing the homes.

Hi, UNKNOWN SPARKER! :)
Thanks, I do like my characterful pot!
And yeah, the quilt is weird---but pulling up some fabric this morning, I see it has been patched--patches sewn on top of old material--I think the interesting edges are patches too!

KIRSTEN: Thanks for your thoughts on illness in the business world---social class in American gets complicated, and more so because it's somewhat hidden, since as a culture, we like to think we aren't affected by class...

I looked up Puritan views of illness.
Those wacky Puritans! They are so fascinating.

Benjamin Wadsworth (1670-1737) said,
"All our bodily illnesses and ailments whatsoever, are ordered forth by God, as to the kind or sort, the measure and degree, the duration, and all the proceeding, concomitant and consequent circumstances of them.”

But it's not necessarily punishment!
HOW BOUT THIS, from
Cotton Mather:

“Sickness does not always come, to manage a Controversy of God with us, for some Iniquity.”
God made some persons sick to test their faith and patience, as He had tested Job. This kind of suffering was reserved for God’s most beloved children. In that case, diseases must not be seen as punishments, but as “Love Tokens.”
--Mather, "Mens sane in corpore sane" (1698)
https://quod.lib.umich.edu/cgi/t/text/text-idx?c=evans;cc=evans;rgn=div2;view=text;idno=N00684.0001.001;node=N00684.0001.001:3.2

I say f@#k both Wadsworth and Mather.