How do we map our lives? 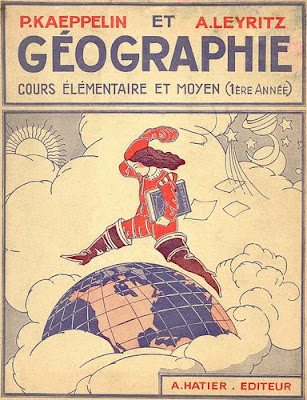 I admitted to Annika that I'd never realized how close Berlin is to Sweden. (I thought it was farther south.) "You'd never know I work with geography from my knowledge of maps," I wrote.

At the end of a long e-mail in reply, she wrote:
"P.S.: Geography isn't really about maps, is it?"

Right, not to me. To me, geography is another story, a way of talking about living in the physical world. It's a cousin to those other maps of our lives: religion, or poetry.


"Your actual being is changed. My heart, for instance, was partially made by the songs of Frank Sinatra and by movies I went to when I was growing up. My heart was shaped by stories, by pictures, by songs.

"I believe we are made by art, art that matters. Not what’s ingenious, clever, or hard to read. Not a mystery puzzle.


[image of geography book from pillipat's flickr]
Posted by Fresca at 10:06 AM

Oy! Ave! Golly-gee-wow! This'll be a bit long-winded, so feel free to remove it, if you need to. I'm responding here, cuz, as usual, this Rose or Fresca by any other would inspire as much. I was drawn to the globetrotting illustration you chose to post: Instant associations--how-- as a precocious reader, who would spend hours staring at the hundreds of spines on my parents' bookshelves and running around playing dress up with my mom's wardrobe, exploring the mysteries of her jewelry and accessories drawer-- I would tumble together "The Little Prince", Machiavelli's "The Prince" and my mother's tiny,jewel-like ruby and gold, precious bottle of Prince Matchabelli's "Windsong" perfume. To this day, I have never read "The Prince"-although I think I will soon!-- but I know a smattering of enough about that prince that I snickered and guffawed a couple days ago while we drove down our street behind a van sporting a bumper sticker that said "What Would Machiavelli Do?"! I've been reading about capitalism and slavery, chocolate, honey, colonialism, imperialism and poetry this summer. My mom always had that tiny bottle of "Windsong" next to an equally tiny "Chanel # 5" and some kind of Arpege. She used them so sparingly, they never seemed to be replaced or lessen in volume. Never being a perfume gal myself, I do now have an un-opened bottle of eau de the Artist Formerly Known As... a souvenir of his last concert in Mpls that daughter numero uno sweetly invited me to! After rapidly googling, I've learned that there really was a Prince Matchabelli who founded the perfume company, with his wife, the Princess, and he was a prince of Georgia--(the one in Europe, not to be confused with...and his wife, not to be confused with "A Princess of Roumania", a book I also read this summer. Talk about topsy-turvy geographies and stories!) And Niccolo Machiavelli has a cenotaph in Florence at the Church of Santa Croce, the elegaic reads: "Tanto nomini nullum par elogium"/"For so great a name, no praise is adequate/No praise is equal to such a name"... On poetry: Jack Gilbert and his friend Donald, moved into Molivos/Mithymna a few months before daughter numero uno's sperm donor and I got married there. He and Donald were guests at our wedding. I still have a wonderful note they wrote and left us on a scrap of paper when they'd stopped by to wish us kalo taxidi/bon voyage several days later and we were not home. I walked many kilometers around the island with Jack and Donald. He told me about Linda gregg, the incredible poet he was married to , who was published by Grey Wolf Press here in Mpls. and who also lived and wrote in Molivos. I was never there when she was, I don't think. I never had the courage to read her work until after returning to the states when my heart didn't shatter into a billion pieces any time I thought about Lesbos/Mytilini. She is one of my favorites! Some beauttful pices of jack's work that relate beautifully to is post of yours: "Poetry Is A kind of Lying", "The Forgotten Dialect Of the Heart", "In Dispraise of Poetry"...

Coffee or soup and a good schmooze, soon?

I thought of saying something or other about this intriguing post, but the previous comment paid it shapely tribute enough.

Hi, Stef:
I Love long comments, especially when they're full of geography and stories.

Wow, I hadn't remembered (or never knew) that Jack Gilbert was at your wedding in Greece. Small world, indeed.

Wouldn't it be interesting to draw a map of one's life connected to the places where things happened? It could be like My Life: Google Earth.
It could include things like the places our mother's perfume came from. My mom wore Jean Patou's Joy, which I assume is made in France? Like yours, she used it sparingly (expensive stuff--and strong!!), and I still have an almost full bottle of hers.

Thanks for saying, Deanna! (Whenever I write about writing, I think of you too.)