Michael reminded me on my earlier post today of the Bert & Ernie New Yorker cover from 2013.
I had made a Kirk/Spock version of it at the time!

Here's a REPOST from this blog:

"Moment of Joy" by Jack Hunter {"Cover Story"}:
Sesame Street's Bert and Ernie watch the Supreme Court of the United States strike down the Defense of Marriage Act (DOMA) as disparaging and injuring same-sex couples. 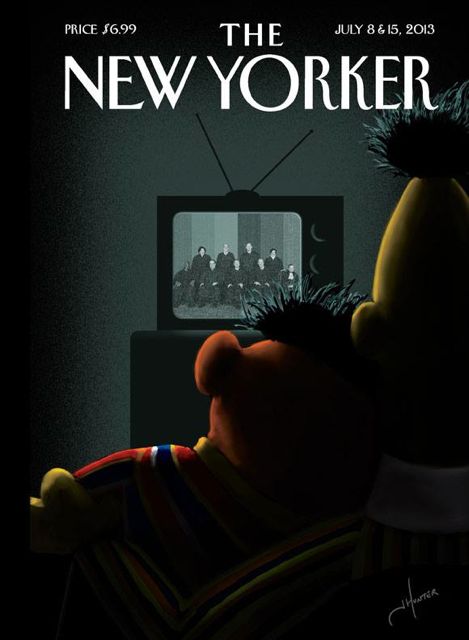 Of course, to Kirk and Spock, this is an ancient, historical document: 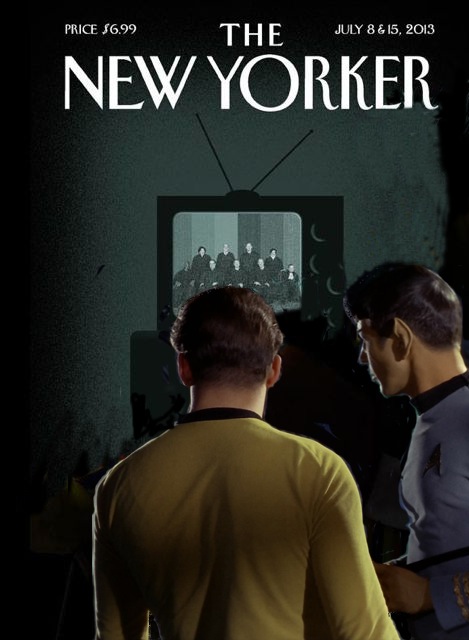 My first-ever ^ photoshop! (with help from bink)

From the Supreme Court decision striking down the Defense of Marriage Act, Justice Anthony M. Kennedy writing for the majority:


DOMA singles out a class of persons deemed by a State entitled to recognition and protection to enhance their own liberty.
It imposes a disability on the class by refusing to acknowledge a status the State finds to be dignified and proper.
DOMA instructs all federal officials, and indeed all persons with whom same-sex couples interact, including their own children, that their marriage is less worthy than the marriages of others.

The federal statute is invalid, for no legitimate purpose overcomes the purpose and effect to disparage and to injure those whom the State, by its marriage laws, sought to protect in personhood and dignity.
By seeking to displace this protection and treating those persons as living in marriages less respected than others, the federal statute is in violation of the Fifth Amendment.