Happy Fall Equinox!
My favorite season, with a ten-day forecast of temps in the 70s.

Marz and I are going up north for a couple nights this weekend.
Not to our usual motel in Duluth, which was booked (it's peak leaf-viewing season), but to a Tiny House airbnb--cheaper, surprisingly--on the south side of Lake Superior--there the shore is sandy beach, not rocky bluffs.

Glam shots from the site: 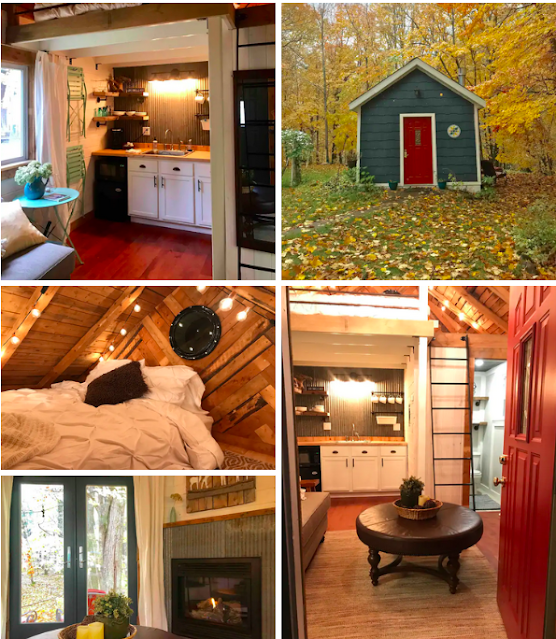 I'm feeling dissatisfied and a bit bored with my life––boom!––after Auntie Vi's death.
Death (grief) can shake you upside down...

Nothing's particularly wrong with my life, or nothing that wasn't wrong before.

I haven't complained about store management recently, for instance, but––ha!––it's as inept as ever.
Yesterday one of the best workers was storming around saying,
"Could we have some systems around here??? I want to walk out and NEVER COME BACK!"
The manager on duty said nothing.

I met my coworker smoking by the dumpster. "I'm sorry," I said. "I feel that way too sometimes. You're a good worker--have you thought about a different job?"

Yeah. The people who choose to stay stay DO love it, usually... and hate it too. It's very Best of Times/Worst of Times.

And then, a month ago Big Boss had asked me to take photos for social media, and email them to him to post on FB (since I deleted my account).
I just checked and he hasn't been posting most of them on FB.
(I post them myself on IG.)

"Shall we revisit this plan?" I just emailed him.

Meanwhile, Ass't Man (AM) is––praisethelord!––far BETTER than before––after truly horrible behavior––ever since around my birthday in March, when Big Boss pulled him into the office for a come-to-Jesus...

AM has been making slantwise apologies to me:
"I grew up being taught this wrong idea about 'color blindness'", he said the other day; and, "I had a chip on my shoulder and grandiose ideas about improving this place when I came here ...".

Whatever. I reserve full trust.
But he hasn't gone off on anyone in six months, and he's been fun again!
I mean, I invited the guy to volunteer in the first place, a couple years ago, because he was lively and interested.
Then he became a Dictator Monster... and now he's been back to his chill self, enjoying showing me weird donations and speaking in funny voices.

He also--wonderfully--gives all the workers super great deals on stuff. As a middle class white guy, he isn't grateful for our store credit, (unlike some of my coworkers who think management is "nice" (!) to give us anything); he sees it as offsetting our serfdom-level pay.
And it does--especially the generous way he doles it out.

So in that way, he uses his power for good, and it's true that I almost never spend money on anything except dolls--the Halloween pumpkin doll costume was and even most presents I give are from the store––which means I live pretty well on minimum wage.

So, the thing is, I'm just antsy.
I haven't learned anything new in ages.
(Geez, Self, that ^ is totally NOT TRUE.)

We've all been knocked sideways the past couple (eight) years, and it's not like everything's right-way up now either.
But it's not that, I don't think. Or, it's that, but it's other stuff too.

Sometimes dissatisfaction is an opening, an invitation for Change to come along. And sometimes it just passes.
I don't know which this is.

Interesting to read about how you are feeling at the moment. The thing you said at the end about not having learned anything new in ages rings true. I have noticed that I learn a new skill of some sort every few years-not sure of the frequency. Some of the things stick and some don't but it always livens me up. I hope your break with Marz in that very cute looking house gives you a chance to think about things. And of course, Vi not being there is a huge change which has a big effect.

such a sweet little BnB, have a great holiday. Getting away can help with that "offness" you are feeling. Perhaps there is a major change coming that you don't know about yet. At least Asst. Man. is more personable now.

what a lovely place to spend a weekend!!! Our leaves haven't really started turning yet.