Last night I needed to clear my head of weighty moral issues so I spent the evening soaking up energy from Freddie Mercury on youTube.

Someone put together a nice slideshow of him, through his life:

It's hard for me to imagine that I will ever love any music the way I love rock 'n' roll. Besides its sheer life force, no other music has wrapped itself around my life the way rock did way back when.
As a teenager in the 1970s, I fell asleep to rock radio every night.
Queen was never my favorite, but they laid tracks in my brain, and when I hear them now I can smell again the blue plastic transistor radio I kept next to my pillow. 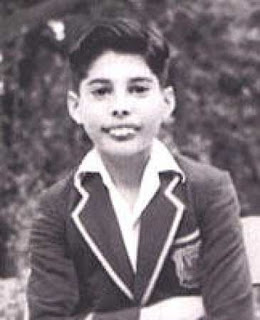 [1] Since they weren't my favorite, I never thought much about Queen until I wrote the geography book on Tanzania.
I was amazed to learn that frontman Freddie Mercury (left) was born Farookh Bulsara in Zanzibar, a British Indian of Parsi (Persian Zoroastrians) ancestry.

[Image of Freddie Mercury as a child from B Side: "Before They Were Famous".]

I wrote Freddie up for the Famous People section, noting he'd used the Swahili/Arabic term "bismallah"--calling on "the name of God"--in his magnum opus "Bohemian Rhapsody" (1975).

Reading up on him this morning, I see that because of this one sacred phrase

in 2004 Iran--where Western music is strictly censored and homosexulaity is a crime--OK'd a release of Queen's greatest hits.
The BBC reports:

"The cassette, costing less than $1 (55 pence), comes complete with translated lyrics and an explanatory leaflet. 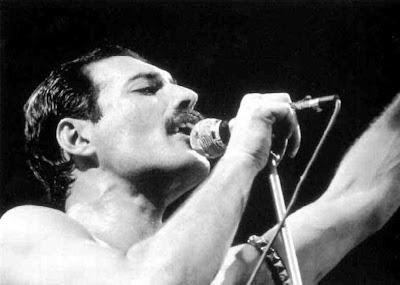 "It tells Queen fans that 'Bohemian Rhapsody' is about a young man who has accidentally killed someone and, like Faust, sold his soul to the devil.
On the night before his execution he calls God in Arabic, Bismillah, and so regains his soul from Satan."

Music scholar Judith Peraino, on the other hand, calls the song a "charming subversion of macho rock and roll" achieved through the "bohemian stance toward identity, which involves a necessarily changeable self-definition ('Any way the wind blows')."

That's a funny thing about art: it mirrors who you are.
Mercury himself basically said it didn't mean anything, but nothing means nothing...

Simple-minded, I prefer rockabilly/surf song "Fat-Bottomed Girls" (1978) with pre-mustache Freddie at his full glorious force (and looking like Dr. Frank-N-Furter in Rocky Horror, or the other way round?).
Written by guitarist Brian May, who gave up his astrophysics studies when Queen hit fame, but who--I love this--finally finished his PhD in 2007.


A couple more images of Freddie as a baby: 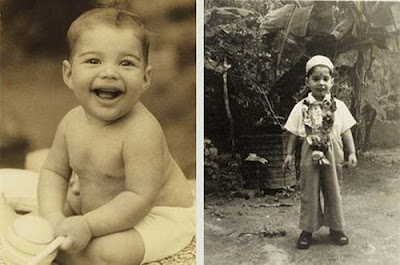 Which did come first? Frank-N-Furter or Freddy? Too alike! And those teeth... the poor child!

Pretty much both happened at the same time--early 1970s.
I can't find anything, after a quick google, linking them directly, though many people compared them like I did.
Possibly they were just in the same time stream?

From Wikipedia's entry on "Glam Rock":

"Glam rock (also known as glitter rock) is a style that developed in the UK in the early 1970s that was performed by singers and musicians wearing outrageous clothes, makeup, hairstyles, and platform-soled boots.
The flamboyant costumes, and visual styles of glam performers were a campy, theatrical blend of nostalgic references to science fiction and old movies."

I missed out on Queen. Not sure what I was doing then. Going back to work, maybe. My nighttime radio listening was way earlier than yours, but wasn't it the best thing ever? Radio is always so intimate and still within us all so closely. (just like love)

And so effective for relieving heaviness of spirit. (Like W. Shat)

MARGARET: That's a great analogy--rock is like blue jeans, culturally.
Anything with a strong life force reminds me of Kirk.

I've always loved that Brian May finished that PhD. He also just co-authored a really lovely book on stereographs that arrived at our house last week: http://www.amazon.com/Village-Lost-Found-Brian-May/dp/0711230390/ref=sr_1_1?ie=UTF8&s=books&qid=1270221960&sr=8-1 It comes with its very own fold-flat stereoscope.

Cool, Krista!
May also wrote a book about astronomy--I intend to look it up.
I hadn't realized what an interesting group of people were behind Queen. But it makes sense--the music is interesting too.

I guess you need to let the greatest hits to the side, check queen II, the march of the black queen, way better than bohemian rhapsody