For my own sanity, I've pledged to judge the forthcoming Star Trek XI on its own merits. I am breaking that pledge already.
From Entertainment Weekly's ST XI spread: "Kirk [Chris Pine] assumes the captain's chair."
Note Pine's spraddle. 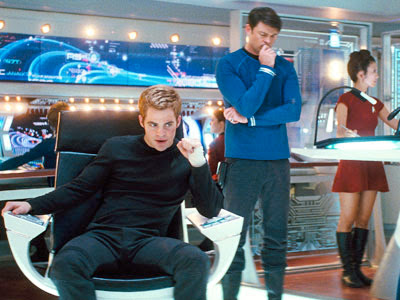 In contrast, one of the things I've always loved about Shatner's Kirk is how he sits like a girl (commonly, but here below in "Arena").
[Feb. 2011: I am not alone. Screencaps of Kirk's Crossed Legs from Zain666 of More Shat, Less Shame]
A brush of swish adds to the macho character's self-confidence and appeal. Spock registers it too: with his classic crossed-arms pose he maintains distance from his come-hither captain. 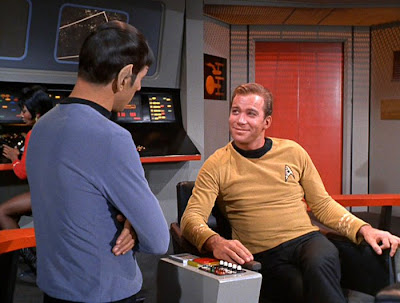 On another note, there's pleasure in hunting for your fun, like the delight of finding Kirk's trouser-split (below) in "The Savage Curtain." 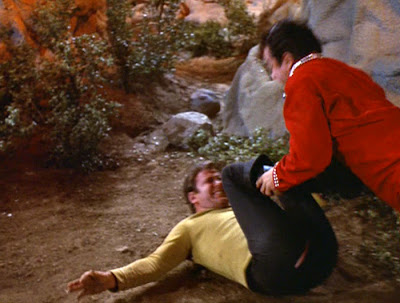 An upside of 1960s TV-sponsors' sexual squeamishness (memos flew, reminding directors, "no open-mouth kisses") is that you had to hunt for your pleasure. Judging by the presentation of Uhura stripping down to her bra in the new ST XI trailer (online 11-17), we won't need to strain ourselves.
I am *not* arguing for the return of sexual repression! But there's a thrill in working to catch a glimpse of a treat, which is missing when the same tidbit is presented already unwrapped.
As Mark Simpson notes, "Maybe I’m an incurable romantic/ masochist, but I sometimes find myself missing the aching, blurry, long-shot tease of 1970s’ Old Spice masculinity. Because it never quite delivers, it never disappoints."
Or, as Spock says in "Amok Time," (by Theodore Sturgeon),
"You may find that having is not so pleasing a thing, after all, as wanting. It is not logical, but it is often true."

In keeping with the distance we've come since the 1960s, looks like the 2009 Star Trek is going to give us what we think we want: lots of close-up, unwrapped goodies, right on our laps.
That can be fun too, of course, and really, it's a win-win. If it disappoints, it'll afford me, at least, the pleasure of pointing out the superiority of Shatner & Co.
_________
POSTSCRIPT: Now I've seen the Star Trek reboot, and I didn't like it, but I give Pine credit for assuming the position, at the very end of the movie, when his Kirk becomes captain. Good one!

I suspect the 'prime directive' of the makers of this movie is to make ST appeal to today's boys.

Mark: Thanks!
"Drag-king"--that's a good one.
Right, Pine's scowling, lean insecurity feels all wrong to me.

I imagine the young Kirk more like a sweet-corn-fed homecoming king, just shedding his puppy fat, relishing the homecoming queen like a pig at a trough... while being confused about his feelings for his teammates.

And I'm afraid I agree with you about the prime directive and what it foretells.

But I look forward to reading your review!

Hmmm, did the women have bare legs and boots in the original? must check YouTube.

The women on the Enterprise wore pantyhose and boots. Interestingly, this uniform skirt appears to be longer than the originals--perhaps trying not to objectify women as sex objects? I liked the short skirts--it was the lack of substance in women's roles that was the problem.